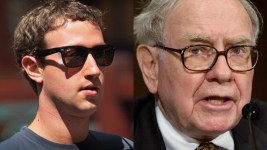 Warren Buffett seemed to entrance the nation with his common sense and logic in an op-ed piece for the New York Times where he stated he paid a smaller percentage in taxes than his receptionist. But Buffett hasn’t been the only billionaire to state they are for higher taxes publicly — Facebook founder Mark Zuckerberg joined the group that also includes Microsoft founder Bill Gates, points out MSNBC.

In a town-hall meeting hosted by Facebook in April, President Obama pitched the idea of greater taxes on the wealthiest members of society. In response, Zuckerberg said succinctly, “I’m cool with that.”

Zuckerberg also signed Warren Buffett’s The Giving Pledge last year, which commits wealthy people to donating at least half of their fortunes to charity.

Although Zuckerberg is worth $13.5 billion, much of the funds are tied up in Facebook and are technically theoretical rather than actual.

Zuckerberg also recently donated $100 million to New Jersey public schools — although the cynical among us may believe that was a calculated move to counter the negative light he was cast under in the Hollywood biopic “The Social Network.”

Others who have joined the Giving Pledge include Larry Ellison, George Lucas and other Facebook founder Dustin Moskowitz.