Don’t Argue With Your Wife 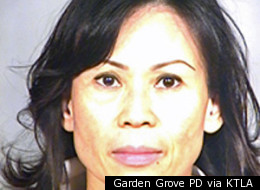 WESTMINSTER, Calif. — Prosecutors say an argument over houseguests led a Southern California woman to cut off her estranged husband’s penis and put it down a garbage disposal.

Catherine Kieu, 48, was charged Wednesday with torture in a case that has garnered international attention and could land her behind bars for life.

Kieu appeared briefly in Orange County Superior Court in a navy blue jail jumpsuit, hiding her face with her long, dark hair. She was appointed a public attorney and denied bail.

She was placed in the jail’s medical ward to be psychologically evaluated, sheriff’s spokesman Jim Amormino told the Orange County Register.

The petite woman whose chains clanked as she shuffled into the caged area of the courtroom where inmates are held will return to court July 22 for her arraignment, which was continued on Wednesday, and a bail review hearing.

Kieu and her husband were still living together in a Garden Grove condo that he owned. He had filed for divorce in May, and they argued before the attack about friends staying at the condo, authorities said.

On Monday night, police say Kieu spiked a meal and served it to the victim.

The 60-year-old man started to feel sick and went to lie down, then awoke tied to the bed as Kieu attacked him with a 10-inch kitchen knife, police said.

She then put the penis down a garbage disposal, police said.

“It’s hard to believe what would motivate a person to do this sort of thing,” the district attorney’s chief of staff, Susan Kang Schroeder, said outside court. “It’s one of the worst things you could do to a person short of killing him.”

Police did not release the victim’s name. He underwent surgery and was listed in good condition at University of California at Irvine Medical Center, hospital spokesman John Murray said.

Murray declined to say whether the penis was reattached or provide any additional details about the victim’s condition, citing patient privacy laws.

Dr. Joel Gelman heads UC Irvine’s Center for Reconstructive Urology, didn’t comment on the victim specifically but said a severed penis is “a terrible loss and it’s the hardest thing, in our specialty, to deal with surgically.”

In cases of penis loss, a penis-like structure with limited utility can be constructed using flesh and skin from the forearm, said Gelman.

Kieu was charged with one felony count of torture, one felony count of aggravated mayhem and sentencing enhancements for great bodily injury and personal use of a knife. If convicted of all counts, she could face life in prison without the possibility of parole.

Garden Grove Police Lt. Jeff Nightengale said Kieu called police Monday night to report a medical emergency and told arriving officers “he deserved it” before pointing to the room where the victim was found bleeding profusely. She was taken into custody without incident and refused to talk to officers further.

The couple was married in December 2009. When the victim filed for divorce, he cited irreconcilable differences, court records show. Kieu was slowly moving her things out of the condo, authorities said.

The victim declined to comment when he was reached by phone Tuesday by the Register.

“This is a private matter,” he said.

A call by The Associated Press to a phone number listed on court documents for the victim was answered Wednesday by a person who promptly hung up.

Officers visited the victim on Tuesday and found him in “amazingly good spirits considering everything he has gone through,” Nightengale said.

In 1993, Lorena Bobbitt cut off her husband’s penis in Virginia and threw it out of her car window into a field on the side of the road. She claimed years of sexual abuse drove her to the attack, and she was acquitted by reason of insanity.

The penis was later reattached.