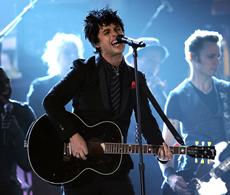 The lead singer for rock band Green Day was booted off a flight this past Thursday after a flight attendant deemed his pants to be inappropriately saggy. The incident cost Billie Joe Armstrong his spot on a Southwest Airlines’ flight from Oakland to Burbank.

“And then,” writes The Wall Street Journal’s Scott McCartney, Armstrong “did what celebrities do when they do dumb things, he tweeted about it.”

The indignant Tweet from Armstrong: “Just got kicked off a southwest flight because my pants sagged too low! What the (expletive)? No joke!”

ON THE WEB:  Celebs off a plane! Top 10 famous problem fliers (Reuters)

The Associated Press writes “an ABC7 news producer who was on the same flight told the station that a flight attendant approached Armstrong as the plane was getting ready to take off and asked him to hike his pants higher. The producer, Cindy Qiu, says Armstrong initially responded by asking the attendant if there weren’t ‘better things to do than worry about that?’ ”

However, the flight attendant did not drop the issue, eventually following through on a threat Armstrong would be removed from the flight if he did not boost his britches, according to the Contra Costa Times.

Once Southwest became aware of the incident, it responded with a Tweet of its own, says US Magazine.

“Very sorry for your experience tonight, someone from our Customer Relations Team will reach out to you to get more details,” says the Thursday Tweet from Southwest, which is considered to be one of the leading carriers in terms of social media presence.

And by Saturday, things seemed to be smoothed over, according to San Francisco TV station KGO.

“We reached out to apologize,” Southwest says in a statement quoted by KGO. “We followed up … and understand from the customer the situation was resolved to his satisfaction.”

Of course, this is not the first time saggy pants have led to a high-profile blow-up at a Bay Area airport.

The San Francisco Chronicle notes Armstrong’s “saggy pants saga echoed the troubles of Deshon Marman, a University of New Mexico student from San Francisco who was asked to pull up his pajama bottoms as he boarded a US Airways flight at San Francisco International in June.”

That episode, as you may recall, raised questions about passenger etiquette and whether attendants should be emboldened to enforce reasonable dress standards.

Marman’s mother also suggested race may have played an role in the removal of her son from that June US Airways flight. That claim drew additional scrutiny a few days later when it was reported that a cross-dressing white man wearing skimpy outfits had been able to board US Airways flight in other cities.