Fourth of July weekend is coming up and you finally get a 3 day weekend!  If you don’t feel like leaving town and dealing with the traffic, there is a lot to do right here in the Bay Area.

On Saturday, July 2nd, Marin Brewing Company is hosting the 11th Annual BreastFest at Fort Mason from 509pm.  This event is a breast cancer benefit for the Charlotte Maxwell Complementary Clinic.  For $45, you get unlimited tasting from over 40 breweries including 21st Amendment, Lost Coast, Lagunitas, Thirsty Bear, Pyramid as well as wine tastings.  There will also be food provided. Last year Pizza Orgasmica was giving away free pizza which was reason enough to go.  Get an hour extra of tasting by getting the VIP ticket for $55.  Remember, this is all in support of the tata’s!

The Fillmore Jazz Festival is this Saturday July 2nd & Sunday July 3rd from 10am-6pm.  It is located on Fillmore Street (duh) in between Jackson and Eddy Streets and is the largest free Jazz Festival on the West Coast.  Besides live music, there is arts and crafts, gourmet food and cooking demos. 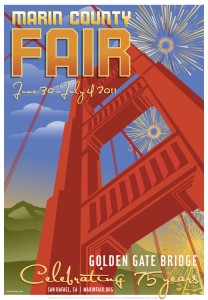 The Marin County Fair is in town from June 30th-July 4th.  The theme this year is celebrating the 75th Anniversary of the Golden Gate Bridge. Musical lineups include The Temptations, The Pointer Sisters, Ozomatli, Toots & the Maytals and others.  This year there will also be performances by Shangri-La Chines Acrobats.  Not surprisingly, you will find me eating a funnel cake, in line for the zipper or betting on the pig races.  Here is a coupon for $2 off admission good for Thursday, June 30th only.

Neko Case and the Dodos will be performing Sunday, July 3rd at the Stern Grove Festival.  It starts at 2pm and admission is free.  It is located at 19th Ave and Sloat Blvd.

While you’re in Sausalito, definitely make time to head over to Sushi Ran for $1 oysters all day long!  And maybe some Shaking Beef and a Spider Roll and…

The highlight of San Francisco’s July 4 celebration is the annual mega fireworks show at the waterfront. At 9:30 pm, fireworks are set off from the foot of the Municipal Pier and from barges north of Pier 39. Best places to watch: Aquatic Park (Jefferson and Hyde streets), the Cannery, Ghirardelli Square, other waterfront spots at Fisherman’s Wharf and Coit Tower. Yes, they’re all touristy and you probably avoid them as much as you do meter maids, but you might find July 4 is the occasion for a worthwhile exception. Or go off-shore: See below for boats that will take you out and park in the Bay during the splashy show.

Here are other places to celebrate the 4th around the Bay Area: