The ‘Real Housewives’ Legacy of Marital Destruction and Financial Ruin

By Tim Kenneally at TheWrap

sent shock waves across the internet on Tuesday, but perhaps it shouldn’t have.

The tragedy follows relevations that Armstrong’s wife, “Real Housewives” star Taylor Armstrong, filed for divorce from him in July. It also came after he complained, “This show has literally pushed us to the limit.”

In reality, the apparent suicide was preceded by a long list of destroyed marriages and financial ruin that have plagued the franchise’s castmates since the “Real Housewives of Orange County” premiered in 2006.

No fewer than eight divorces have occurred among the “Real Housewives” crew, even before the Armstrong union officially began to disintegrate last month.

Some have been more unpleasant than others. Countess LuAnn de Lesseps got the “Real Housewives of New York City” divorce count rolling when she split with her husband, Alexandre de Lesseps, amid allegations of infidelity.

According to reports, de Lesseps cheated on LuAnn with an Ethiopian woman in Geneva, and admitted the dalliance to his soon-to-be-ex wife via an email. Ouch.

The other side of the country has produced its share of divorce ugliness where the “Real Housewives” are concerned, too. 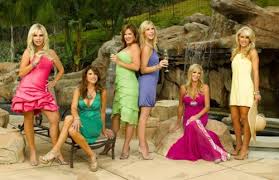 One split-up, between “Orange County” star Tamra Barney and her husband, Simon Barney, spawned a domestic-violence arrest for Simon, after he allegedly threw a retractable dog leash at Tamra, which prompted her to file for a restraining order.

(Like Simon Barney, Russell Armstrong was also accused of roughing up his wife. Armstrong addressed the subject with shocking candor during an interview with People, telling the magazine, “Did I push her? Yes, maybe things happened in the heat of the moment, but it was during a time in our lives that was not characteristic of who we were.”)

Prior to their divorce, the Armstrongs had experienced more than their share of financial difficulties, with Russell filing for Chapter 7 bankruptcy in 2005.

In that respect, the Armstrongs were far from alone among their “Real Housewives” colleagues.

Teresa and Joe Giudice, of “Real Housewives of New Jersey,” stand as the most famous

example. In 2009, the couple filed for Chapter 7 bankruptcy, citing $11 million worth of debt that they’d amassed with numerous creditors — which didn’t prevent Teresa from going on a $60,000 spending spree just days after filing for the bankruptcy.